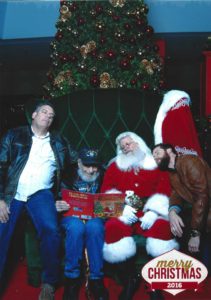 You survived another round of holiday mayhem.  Give yourself a WHOOO!

As the dust settles on the holiday experience you may, like me, have the residual impressions from encounters in the market place that have been seared into your memory like a seal in hot wax.

Good or bad, we have a tendency to hang on to the memories of these encounters.  And yes, they consciously (and sometimes sub-consciously) have real impact on whether we will do business there again…

I was spending the day with my 92-year-old father; a WWII veteran, a husband, and father of 9 children (of which I’m number 8!).  We were walking through a mall when I remembered that my 24-year-old son Joseph and I had not taken our yearly picture with Santa.

(Back when my son was 18 years old, he lamented to me that we had never once taken Santa picture… So at that time, I said, “OK, let’s go!”  The result was the start of an annual tradition of funny, awkward pictures with good-hearted Santas going along with our fun.)

So standing in this mall, I suddenly realized, Holy Cow!  With my 92 year old Dad joining us this year, I knew this picture could be truly EPIC!  I called my son to join us.

As we took our turn waiting patiently in line with the other children and their families, it was fun to notice the looks of the others searching for a child in our group.  (I was the biggest child.)

Two observations in this encounter made lasting impressions on me that will impact the way I feel about “this mall”… all because of the people employed.

The first was when I was watching a family ahead of us with their two small children. The youngest was about 1 year old and was sitting on Santa’s lap with no problem at all.  However, her slightly older sister didn’t trust this jolly, perfectly presented Santa.  She wasn’t having any of it and it was clear the photo op wasn’t going to work.

I watched, as Santa gestured to the parents to come take his place on the big chair, so that they could just take a family photo instead.  Santa made sure the uncomfortable little girl was watching, as he made it obvious that he was walking away.  She calmed down and they were able to take a family photo.  But unbeknownst to the family, Santa had snuck around behind the chair and peeked over the back, posing with thumbs up and big smiles!  Wow… such a wonderful surprise when the family saw their picture afterwards!  And such a great way to handle that situation. Delightful!

This Santa owned it. He had obviously been doing this for a long time and had multiple ways to ensure families still got their ‘picture with Santa’, while ensuring emotional outbreaks wouldn’t ruin the shot or result in frustrated parents.

While watching all this transpire, I thought to myself, I like this guy!

When it was our turn, Santa was more than happy to oblige when we shared the fun we Hoffman boys like to have with our photos.  After the obligatory one pose, Santa suggested we do some more poses… he added props, and really got into the silliness of the moment. But then, the real magic happened.

Our Santa noticed the Army Air Corp hat that my father was wearing and he thanked Dad for his service.  Santa then went on to spend at least 10 minutes asking questions and pouring gratitude and love onto my Dad.

Now you are supposed to walk away paying for just one photo.  But before we left, this Santa gave ALL the pictures we’d taken to my father, as a thank you gift for everything my Dad had done by serving in the Army Air Corp.

I was blown away. Not at the free gift of all the photos.  But at how my Dad felt in the 10 minutes we spent with Santa at the Town East Mall in Mesquite, TX.

This Santa owned the moment and took advantage of the time together to make a total stranger feel appreciated and loved.

I know the holiday season is over and it’s been over a month since this encounter, but have I told you about my new favorite mall in Mesquite TX?  It’s the Town East Mall.  I’m writing this blog here right now, as I’m enjoying a cup of coffee.  And, I’ll be hanging out here more often, spending my time and my money, because of the wax seal imprint on my heart that I now have of an encounter with a person who OWNED his role.

I want to be a hot wax imprinter!  I want to be that guy that makes more impressions like that one on the people I work with every day.

Thanks for the amazing gift, Santa.  My New Year’s resolution is to own it more… just like you.