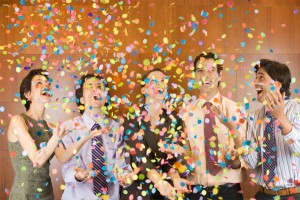 Michael Hoffman grimaces during his Keynote Address Tuesday as he demonstrates the plight of a meeting planner trapped in an F5 tornado.

With dozens of education opportunities, hundreds of exhibitors and thousands of attendees, AIBTM 2014 may not seem like a rejuvenating day at the spa, but Michael Hoffman sees it that way. In his Keynote Address Tuesday, Hoffman told everyone to enjoy their time in Orlando, kick back and invest in themselves and their teams. 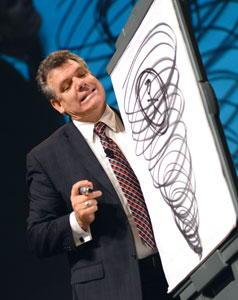 He delivered this profound message in a unique way, often running across the stage with excitement and enthusiasm during the a one-hour address filled with plenty of humor. His message: Your world can be turned upside down as if it were hit by an F5 tornado, and you handle it, but you need to step back and recognize that accomplishment.

Hoffman’s view is that life can be like an F5 tornado. When a tornado hits your team, you can either pull together or pull apart, and your reactions dictate what happens.

“But in a hectic world people often do not take the time to realize what they have accomplished,” Hoffman said. “You don’t celebrate. You move on to the next situation and don’t recognize that you did something or said something that made a difference. You fail to recognize the skill sets you have.

“You need to keep that F5 tornado at the door for a few days. You need to invest in yourself.”

That is one of the purposes of attending AIBTM, he said. It is an opportunity to re-evaluate and refresh yourself.

“When you are born, you get this bag that you fill up with your experiences. You add skill sets to this bag,” Hoffman said. “You assess, assess, assess, reach into the bag and say, ‘Let’s deal with it this way.’

“You need to pull yourself out of that bag, put it on the table and ask, ‘What’s working?’ Polish it up and put labels on it because when you put it back in that bag it will be more ready for you. That’s what AIBTM is about.”

Hoffman used large doses of humor as he pulled a trick out of his own bag. He asked everyone to stand and acknowledge five people they had not met before. He then asked them to do it again — this time as if they were greeting one another at a family reunion.

“What did you observe? It was more fun and engaging the second time,” Hoffman said.

Individuals may not decide a company policy, but they can influence the reaction.

“Power comes when you interact. Allow yourself an opportunity to let people in and get closer,” he said. “This is about the dynamics of you making a choice to play. That is the secret to success. There are more options with yes than no.”

That positive communication can be applied to businesses, where there are personal and practical interactions. These interactions allow you to build a team that has confidence, and confident team members can learn from one another and grow in their professions.

“We want people who are confident in who they are and competent in what they do,” Hoffman said. “Some people think being a person of influence is this massively important thing, when it really is just moving your lips.”
##